At the north wall of the main church is the monument to the memory of Fr. John Corrin, P.P., V.G. Up until recent years this monument was situated at the south corner of the west wall.

Originally there stood a tablet behind the monument, the inscription on which read:

OF YOUR CHARITY PRAY FOR THE SOUL OF THE REV’D. JOHN CORRIN, V.G. OF FERNS WHO LIETH BURIED UNDER THIS STONE. HE WAS PARISH PRIEST OF WEXFORD DURING LIV YEARS AND SO ENDEARED HIMSELF TO EVERYONE THAT ALL MEN ESTEEMED HIM AS A FRIEND AND HIS FLOCK HIMSELF REVERED HIM AS A FATHER. IN DEEP AFFLICTION FOR THE LOSS OF SUCH A PASTOR THE PEOPLE BY PUBLIC SUBSCRIPTION ERECTED THIS MONUMENT TO HIS MEMORY ON WHOSE SOUL AND ALL CHRISTIAN SOULS JESUS HAVE MERCY. AMEN. + JESUS MERCY. + BLESSED LADY HELP. I BEG ALL YOU WHO THIS DO SEE PRAY FOR MY SOUL FOR CHARITY FOR AS I NOW AM SO YOU SHALL BE. PATER NOSTER. AVE MARIA.

Fr. Corrin was a well-loved friar in Wexford, so let us give some details of his life. He was born about 1749. He was ordained in Louvain [Belgium] on the 29th of May, 1779. He was appointed parish priest of Wexford in 1781. Fr. Corrin died on the 4th of April, 1835, aged 86, and was buried in the Friary Church. His grave is said to be on the south side, a few yards from the sacristy door – where the old statue of St. Anthony once stood.

Fr. Corrin’s monument was changed from its original position during the renovations of 1857. Designed by Pugin, it had formerly a Caen-stone canopy; but for some reason, perhaps disrepair, this was removed in the Guardianship of Fr. Simon Bonaventure Hore, O.F.M.

An interesting note: At the parish church of Our Lady of the Assumption in Our Lady’s Island, Co. Wexford, there is on display a crucifix that belonged to Fr. Corrin. 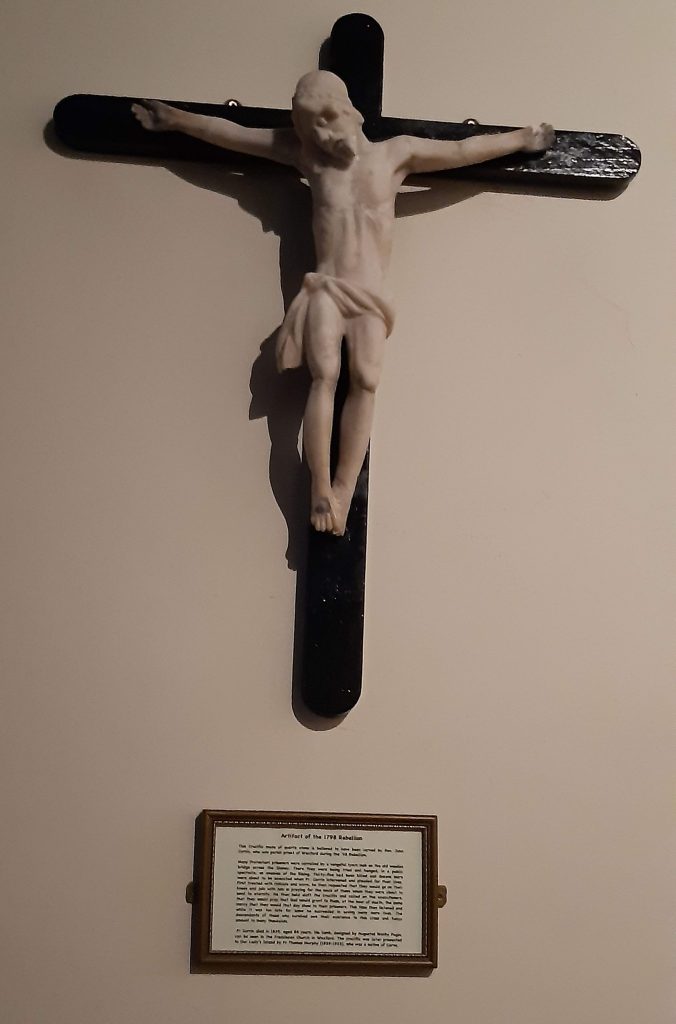 The inscription on the plaque beside it reads: 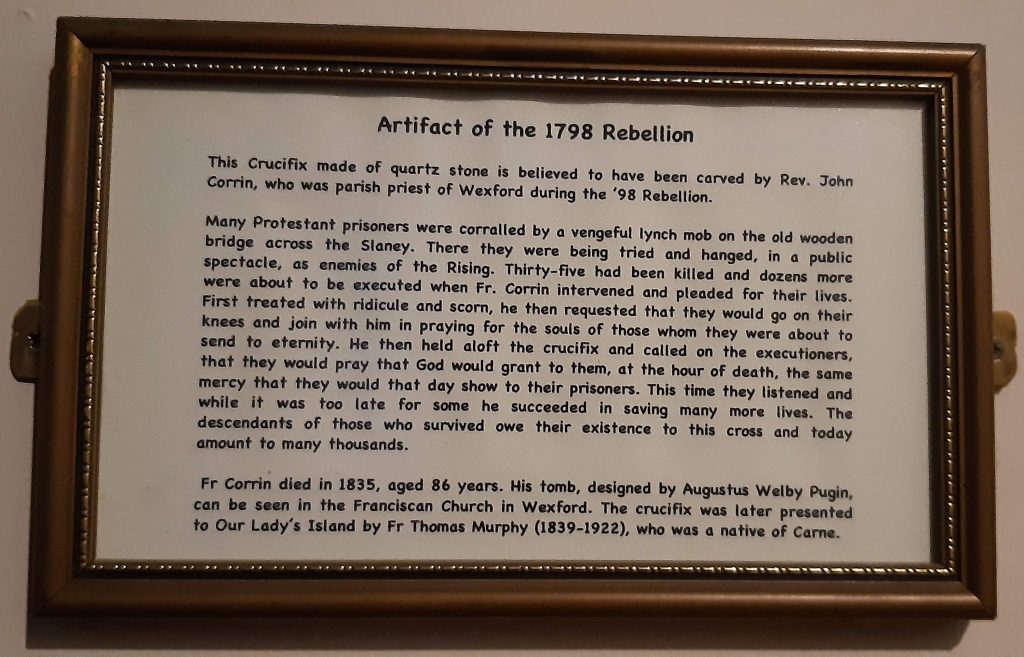 THIS CRUCIFIX MADE OF QUARTZ STONE IS BELIEVED TO HAVE BEEN CARVED BY REV. JOHN CORRIN, WHO WAS PARISH PRIEST OF WEXFORD DURING THE ‘98 REBELLION.

MANY PROTESTANT PRISONERS WERE CORRALLED BY A VENGEFUL LYNCH MOB ON THE OLD WOODEN BRIDGE ACROSS THE SLANEY. THERE THEY WERE BEING TRIED AND HANGED, IN A PUBLIC SPECTACLE, AS ENEMIES OF THE RISING. THIRTY-FIVE HAD BEEN KILLED AND DOZENS MORE WERE ABOUT TO BE EXECUTED WHEN FR. CORRIN INTERVENED AND PLEADED FOR THEIR LIVES. FIRST TREATED WITH RIDICULE AND SCORN, HE THEN REQUESTED THAT THEY WOULD GO ON THEIR KNEES AND JOIN WITH HIM IN PRAYING FOR THE SOULS OF THOSE WHOM THEY WERE ABOUT TO SEND TO ETERNITY. HE THEN HELD ALOFT THE CRUCIFIX AND CALLED ON THE EXECUTIONERS, THAT THEY WOULD PRAY THAT GOD WOULD GRANT TO THEM, AT THE HOUR OF DEATH, THE SAME MERCY THAT THEY WOULD THAT DAY SHOW TO THEIR PRISONERS. THIS TIME THEY LISTENED AND WHILE IT WAS TOO LATE FOR SOME HE SUCCEEDED IN SAVING MANY MORE LIVES. THE DESCENDANTS OF THOSE WHO SURVIVED OWE THEIR EXISTENCE TO THIS CROSS AND TO-DAY AMOUNT TO MANY THOUSANDS.

FR. CORRIN DIED IN 1835, AGED 86 YEARS. HIS TOMB, DESIGNED BY AUGUSTUS WELBY PUGIN, CAN BE SEEN IN THE FRANCISCAN CHURCH IN WEXFORD. THE CRUCIFIX WAS LATER PRESENTED TO OUR LADY’S ISLAND BY FR. THOMAS MURPHY (1839 – 1922), WHO WAS A NATIVE OF CARNE.

The four stained glass windows date from about 1892, and were put in place under the Guardianship of Fr. Bonaventure Hore, O.F.M. The windows are from the ateliers of Labin in Tours, France. The windows feature: 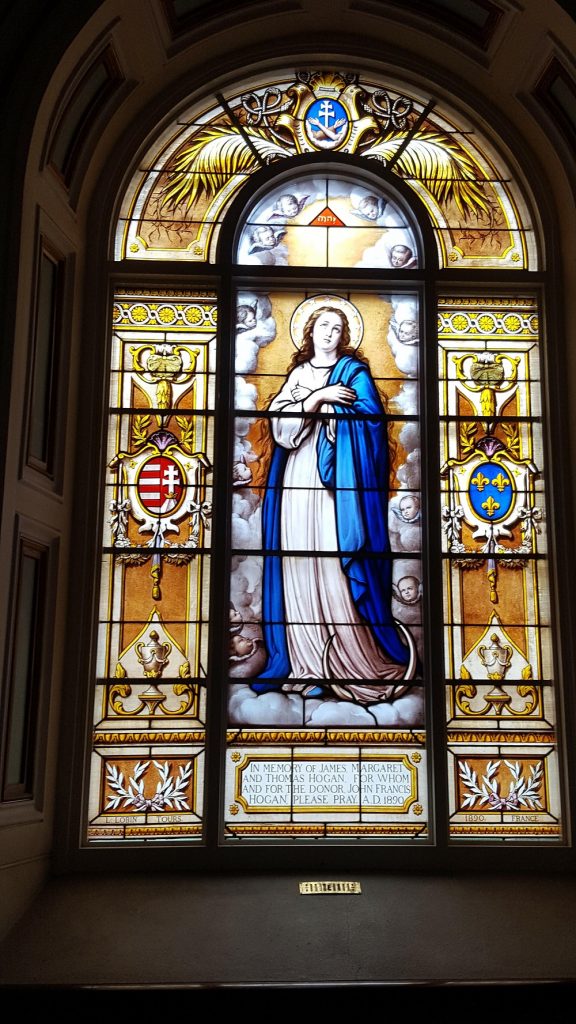 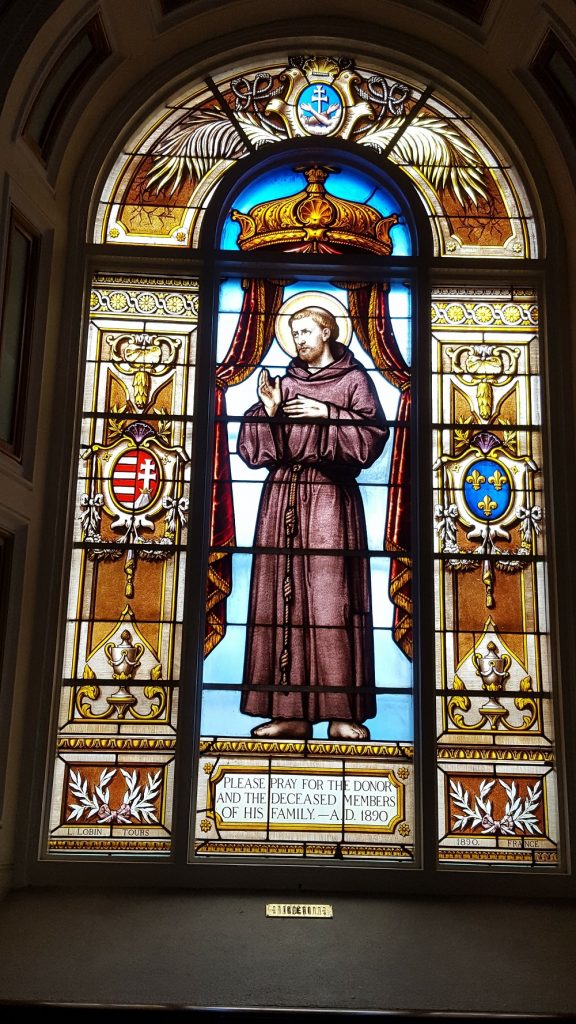 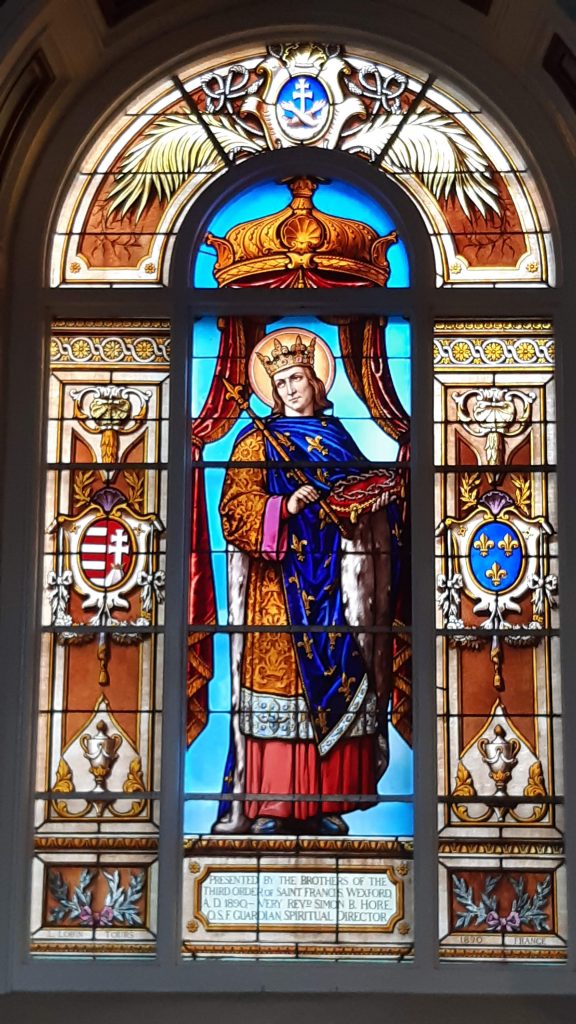 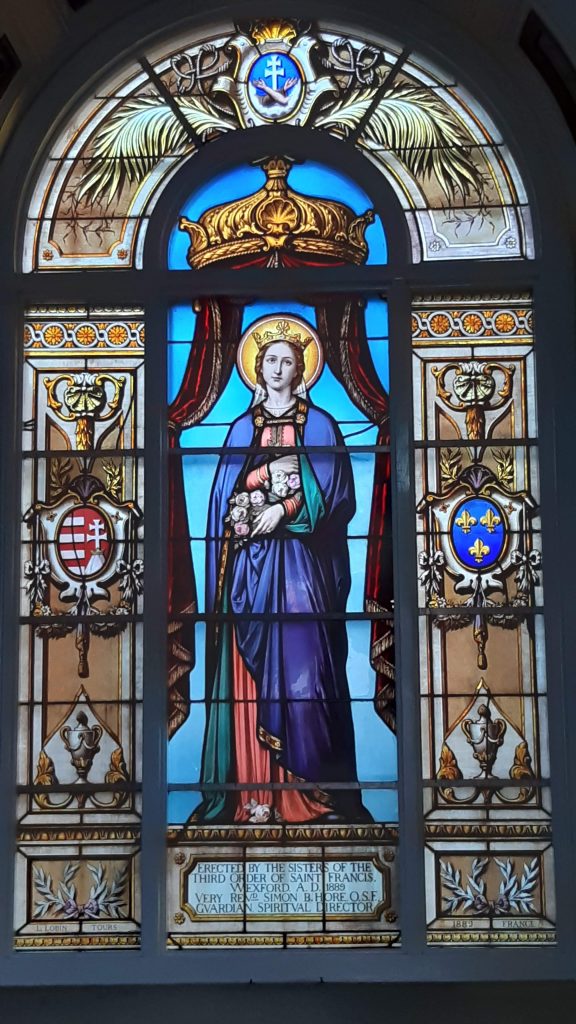 A history of the Shrine of St. Adjutor can be found here.

The south wall, that is, the wall to the right as we face the High Altar, and the north wall, to the left, and the east wall, behind the High Altar, are the ancient walls of the pre-Cromwellian Wexford Friary. Outside the church, at the east gable, the buttressed base of the pre-Reformation wall can be plainly seen. The present Ionic pillars and coffered ceiling of the church date from 1857. The whole work was executed by a Mr. Patrick O’Connor and his local Wexford craftsmen, who a little later were employed to make the ceiling of the Franciscan Friary in Waterford.

INSCRIPTION ON THE WEST WALL – HISTORY

Inside the Friary Church, on its back or western wall – where, perhaps, the pre-Reformation tower once stood – there is an inscription, giving a summary of the history of the friary. 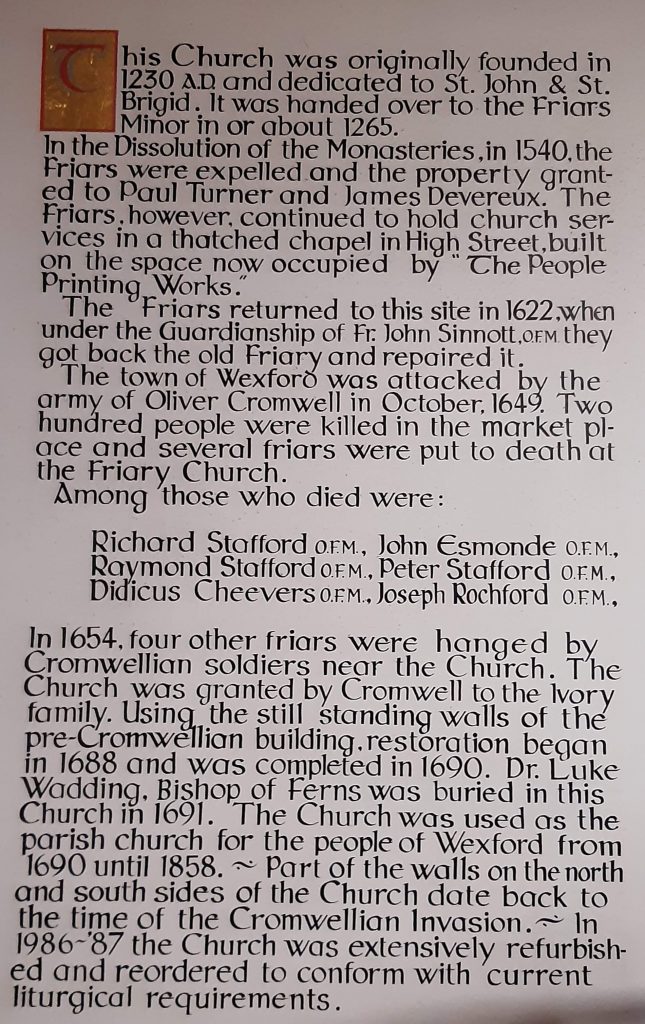 The original wording went as follows:

THIS CHURCH WAS ORIGINALLY FOUNDED A.D. 1230, AND DEDICATED TO ST. JOHN AND ST. BRIDGID. IT WAS HANDED OVER TO THE FRIARS MINOR A.D. 1269.

IN THE DISSOLUTION, 1540, THE FRIARS WERE EXPELLED, AND THE PROPERTY WAS GRANTED TO PAUL TURNER AND JAMES DEVEREUX. THE CHURCH SERVICES WERE, HOWEVER, CONTINUED BY THE FRIARS IN A THATCHED CHAPEL IN HIGH STREET BUILT ON THE SPACE NOW OCCUPIED BY ‘THE PEOPLE PRINTING WORKS.’

THE FRIARS RETURNED HERE A.D. 1616, WHEN UNDER THE GUARDIANSHIP OF THE REVEREND JOHN SINNOTT, O.F.M., THEY GOT BACK THE OLD CONVENT AND REPAIRED IT. THEY HELD THIS CONVENT UNTIL CROMWELL CONVERTED IT INTO A ‘SLAUGHTER HOUSE’ IN OCTOBER 1649.

ON THE 11th OCTOBER, 1649, WHEN OLIVER CROMWELL COMMITTED FRIGHTFULNESS IN WEXFORD TOWN INCLUDING THE MASSACRE OF 300 DEFENCELESS PEOPLE AT MARKET CROSS, SEVEN FRANCISCAN FRIARS WERE MARTYRED HERE, SOME SLAIN KNEELING BEFORE THE ALTAR AND OTHERS WHILE HEARING CONFESSIONS. THE NAMES OF THE MARTYRED FRIARS ARE: REVEREND RICHARD SINNOTT, JOHN ESMONDE, PAUL SINNOTT, RAYMOND STAFFORD, PETER STAFFORD, DIDACUS CHEEVERS, JOSEPH ROCHFORD.

IN 1654, FOUR OTHER FRIARS WERE HANGED BY CROMWELLIAN OFFICERS NEAR THIS CHURCH.

THE FRIARY WAS REBUILT BY REVEREND FR. M. CHEEVERS, IN 1688 AND COMPLETELY REMODELLED IN 1784. THIS CHAPEL DID DUTY AS PAROCHIAL CHURCH FOR THE PEOPLE OF WEXFORD FROM 1690 TO 1858. THE PRESENT WALLS OF THE SOUTH AND NORTH SIDES OF THE CHURCH, AND AT THE BACK OF THE ALTARS, ARE THE SAME WALLS AS WERE THERE IN CROMWELL’S TIME. THE TRANSEPT WAS BUILT IN 1812. GALLERIES WERE REMOVED IN 1857.

INSCRIPTION ON THE WEST WALL – GAELIC

An inscription on the west wall in the Irish language is no longer in existence. It was a quotation from the works of the famous 17th century Franciscan poet, Fr. Bonaventure O Hussey, O.F.M., and read:

Translated in the English language it reads:

HALLOWED BE THY NAME, O GOD, O FATHER IN HEAVEN, BY EVERY MIND AND MOUTH, EVERYWHERE AND ALWAYS!

Most of the foregoing has been taken from the booklet Wexford Friary, by Fr. Patrick O.F.M., published in 1950.

Photographs of Fr. Corrin’s crucifix and the accompanying plaque are used with permission of the parish priest of Our Lady of Assumption Church in Our Lady’s Island.