INSCRIPTIONS IN THE TRANSEPT

In front of the Blessed Virgin’s Altar lie the graves of many bishops and priests of the 18th and 19th centuries: among others, those of the bishops and priests whose memorial tablets are now on the walls of the transept, whither these monuments were removed during the various renovations to the church.

Thus, in the transept which dates from 1812, on the wall beside the Altar of the Virgin, is the memorial to Fr. John Sinnott, P.P., V.G. 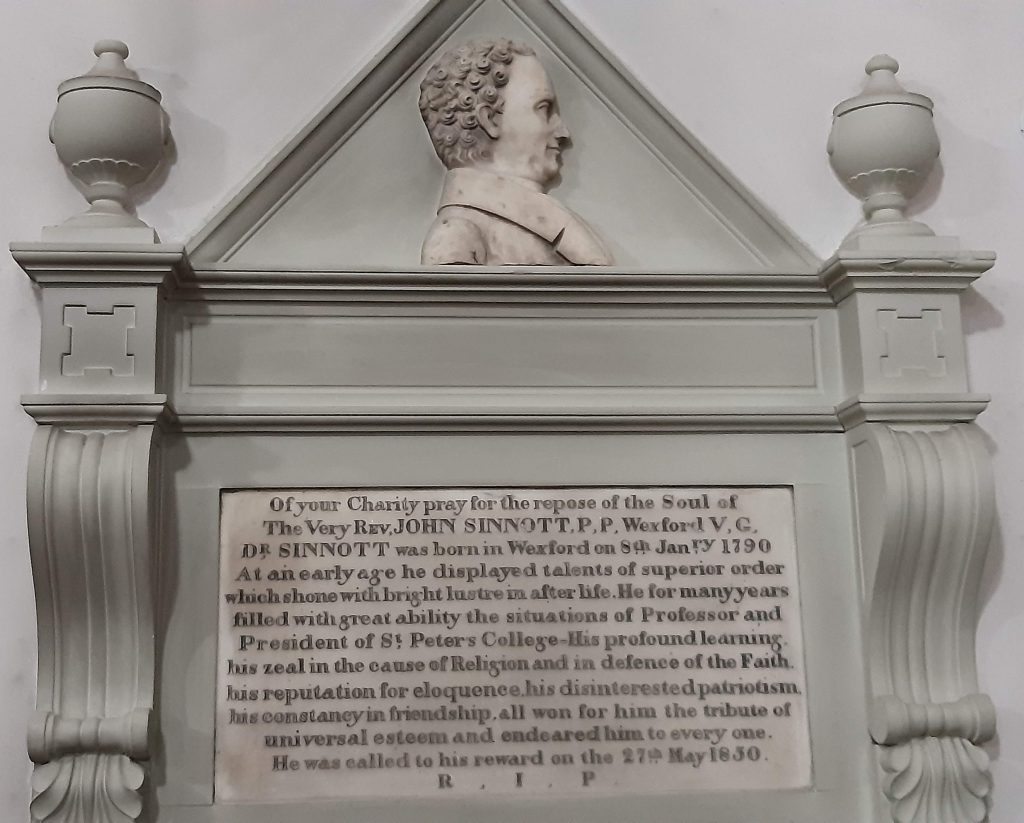 OF YOUR CHARITY PRAY FOR THE REPOSE OF THE SOUL OF THE VERY REV. JOHN SINNOTT, P.P., WEXFORD V.G.

AT AN EARLY AGE HE DISPLAYED TALENTS OF SUPERIOR ORDER WHICH SHOWN WITH BRIGHT LUSTRE IN AFTER LIFE.

HE FOR MANY YEARS FILLED WITH GREAT ABILITY THE SITUATIONS OF PROFESSOR AND PRESIDENT OF ST. PETER’S COLLEGE – HIS PROFOUND LEARNING, HIS ZEAL IN THE CAUSE OF RELIGION AND IN DEFENCE OF THE FAITH, HIS REPUTATION FOR ELOQUENCE, HIS DISINTERESTED PATRIOTISM, HIS CONSTANCY IN FRIENDSHIP, ALL WON FOR HIM THE TRIBUTE OF UNIVERSAL ESTEEM AND ENDEARED HIM TO EVERYONE. HE WAS CALLED TO HIS REWARD ON THE 27th MAY, 1850.

This Fr. John Sinnott was educated at Salamanca [Spain]. He replaced Fr. Richard Hayes, O.F.M. on the teaching staff of the old Bunker’s Hill Seminary. In 1819 he went on the staff of the new St. Peter’s Diocesan College of which, in 1829, he became President. Fr. John Sinnott preached several Lenten Courses in Wexford Friary, where his eloquence and earnestness drew great crowds and won many converts to Catholicism. A portrait medallion of Fr. John Sinnott can be seen in the low-relief bust on the monument.

Buried here in the same grave as Fr. John Sinnott, is his brother, Fr. James Sinnott. When Bishop Lambert, O.F.M. went to Newfoundland [Canada], James Sinnott, still a clerical student, accompanied him. Having been ordained in Quebec [Canada], Fr. James Sinnott worked for twenty-one years on the Newfoundland mission. He then returned to Wexford and was appointed parish priest of Litter, and later of Kilmuckridge. He died in 1869 and was buried in the Friary Church, at his own request, in the same grave as his brother, Fr. John Sinnott.

At the east side of the transept door is the monument to the memory of Bishop Caulfield. 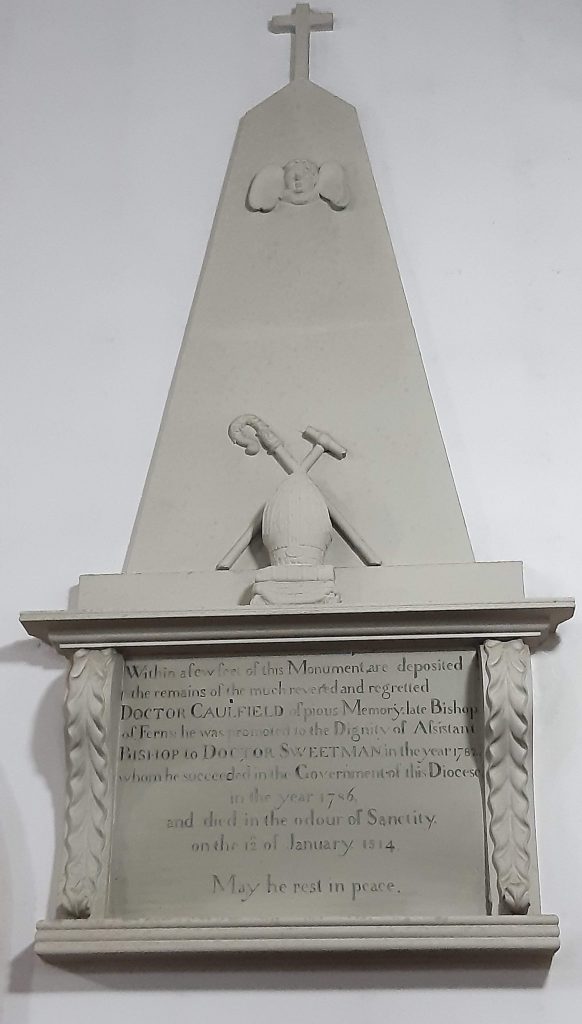 WITHIN A FEW FEET OF THIS MONUMENT, ARE DEPOSITED THE REMAINS OF THE MUCH REVERED AND REGRETTED DOCTOR CAULFIELD OF PIOUS MEMORY.

LATE BISHOP OF FERNS HE WAS PROMOTED TO THE DIGNITY OF ASSISTANT BISHOP TO DOCTOR SWEETMAN, IN THE YEAR 1782, WHOM HE SUCCEEDED IN THE GOVERNMENT OF THIS DIOCESE IN THE YEAR 1786, AND DIED IN THE ODOUR OF SANCTITY ON THE 12th OF JANUARY, 1814.

On the west side of the transept door is the memorial to the memory of Bishop Lambert, O.F.M. 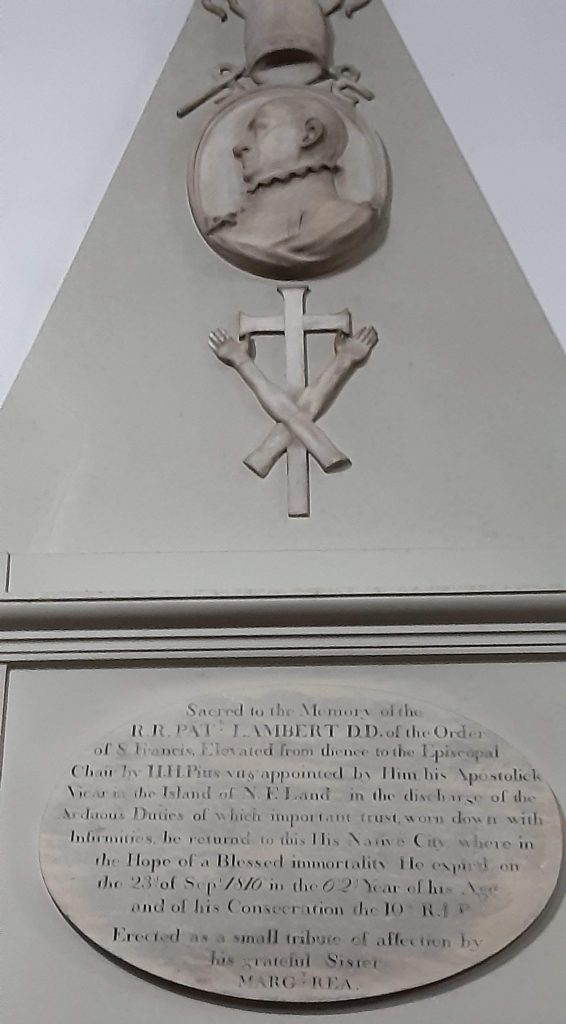 SACRED TO THE MEMORY OF THE R.R. PAT. LAMBERT D.D. OF THE ORDER OF ST. FRANCIS. ELEVATED FROM HENCE TO THE EPISCOPAL CHAIR BY H.H. PIUS VII, APPOINTED BY HIM HIS APOSTOLICK VICAR IN THE ISLAND OF N.F. LAND AND IN THE DISCHARGE OF THE ARDUOUS DUTIES OF WHICH IMPORTANT TRUST, WORN DOWN WITH INFIRMITIES, HE RETURNED TO THIS HIS NATIVE CITY, WHERE IN THE HOPE OF A BLESSED IMMORTALITY HE EXPIRED ON THE 23rd OF SEPTR. 1816 IN THE 62nd YEAR OF HIS AGE AND OF HIS CONSECRATION THE 10th. R.I.P. ERECTED AS A SMALL TRIBUTE OF AFFECTION BY HIS GRATEFUL SISTER MARGT. REA.

A few further details concerning Bishop Lambert, O.F.M., may prove of interest. He was born in Gurtinminogue, Kildavin, Co. Wexford, in the year 1771. Having completed his studies in the Irish Franciscan College of St. Isidore, Rome, he returned to Wexford where he was chiefly occupied with teaching duties in Wexford’s Franciscan Academy. Appointed Apostolic Vicar of Newfoundland [Canada], he became the second bishop in that mission, the first having been another Franciscan, Bishop O’Donnell, O.F.M., from Carrick-on-Suir. Incidentally, Bishop Lambert’s consecration as bishop took place in Wexford Friary in 1807.

In 1807 Bishop Lambert made visitation of Conception Bay and Ferryland; as he wrote to Archbishop Troy:

“I cruised about 21 leagues of the coast and confirmed about 400 children.”

He enlarged the old church in St. John’s, Newfoundland, by adding transepts, built an episcopal residence – a wooden structure referenced later as The Old Palace and several chapels. Ill-health finally compelled him to resign his charge of Newfoundland. Shortly after his return to Wexford, he died in Wexford Friary. It is recorded of him that he was “a man of much refinement of manner, who won the respect of all classes in Newfoundland.”

On the west wall of the transept there hung – until recent times – a memorial plate to Bishop Hughes, O.F.M. The inscription read:

Bishop Hughes, O.F.M., was a nephew of Fr. John Broe, O.F.M., a former Guardian of Wexford Friary, and a cousin of Fr. Richard Hayes, O.F.M., head of the Anti-Veto Movement. Bishop Hughes was born in Wexford town in 1788. He did his studies in the Irish Franciscan College of St. Isidore, Rome, where he was ordained in 1812.

On his return to Ireland, he was stationed for some time in Adam and Eve’s, Dublin, where during the struggle for Catholic Emancipation, his stirring preaching attracted huge crowds and led to the conversion to Catholicism of many non-Catholics.

He returned to Wexford Friary in 1829 and was stationed here until 1840, having been appointed Provincial in 1837. Selected by the Holy See as Apostolic Vicar of Gibraltar, he was consecrated bishop and went to his mission where he spent ten troubled years in arduous and disturbing work. Incidentally, Bishop Hughes’ consecration as bishop took place in Wexford Friary.

On his return to Wexford Friary, his eloquence, in spite of illness and age, still attracted enormous crowds. About 1858 Bishop Hughes held the last ordination ceremony in Wexford Friary. The Franciscan ordained was Fr. John Murphy, O.F.M. It is recorded that, in the last three years of his life here, Bishop Hughes preached to the people from an armchair at the Friary High Altar.

Also buried in the Friary Church is Bishop Luke Wadding of Ferns (not to be confused with the famous Irish Franciscan scholar, Fr. Luke Wadding). Bishop Wadding died in 1691. The site of his grave was covered during the tiling in 1857. But it is remembered that it had a plain tomb-stone, simply inscribed with his name and age and the date of his death.

Here, too, perhaps, lie the sacred remains of two secular priests, Fr. Daniel O’Brien and Fr. James Murphy, and a Cistercian priest, Fr. Luke Bergin, O.C., who were executed in 1655; it is written of them that they “were buried in the ruins of the Friary.” And, although there is no record of what happened to the bodies of the four Franciscans who in 1654 “were captured and hanged without trial in the neighbourhood of the Friary”, it may well be that their sacred remains were interred in the Friary Church.

Somewhere in the Church, too, lies the once-famous tomb of ‘Fr. John of Wexford’ – the Franciscan who died here when Wexford was still a Norman stronghold and at whose grave, it was said, “the sick were cured and even the slain were brought back to life.”

And tradition has it that, in front of the High Altar, is the last resting place of the first Maurice FitzGerald. He died in those far-off days when there was no Wexford Friary here but instead a small Crusaders Chapel – away back in 1177.

Most of the foregoing has been taken from the booklet Wexford Friary, by Fr. Patrick O.F.M., published in 1950.